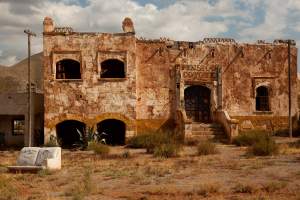 Originally an elaborate fortress constructed in 1969 for the film El Condor, this site was reused over the years for a variety of films, usually involving lots of dynamite. Titles include Blindman (1971) —with Ringo Starr as a love-struck Mexican thief—A Reason to Live, a Reason to Die (1972), Get Mean (1975), Conan the Barbarian, and Dollar for the Dead (1998)—a Sergio Leone tribute starring Emilio Estevez. The painted signs that appear—‘Pension Coyote’—are leftovers from the making of Italian film Honolulu Baby (2000), set in a nameless South American town populated entirely by beautiful women. The ‘Pension Coyote’ originally served […]