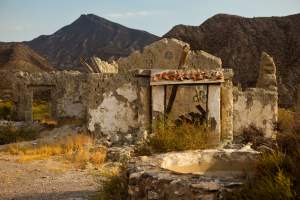 The Saloon in ‘Straight to Hell’

“Nothing remains but a fragment of the back wall and some wooden beams. But thirty years ago, when we went STRAIGHT TO HELL, this was our saloon where Strummer snarled at Courtney Love, and Sy Richardson and Dick Rude gunned down the Weiner Kid, and Grace Jones barred Dennis Hopper from smoking.” From the Forward by Director Alex Cox. Once Upon a Time in Almería: The Legacy of Hollywood in Spain’ (Daylight Books 2017) 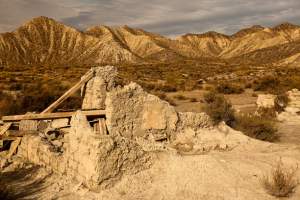 In August 1986, an unlikely crew descended on the Tabernas desert, including Joe Strummer, Courtney Love, Elvis Costello, members of the Pogues, Sy Richardson, and Jim Jarmusch. Even Dennis Hopper and Grace Jones jetted in for a day. The resulting film, Alex Cox’s Straight to Hell, was neither a commercial nor critical success, but it has since achieved a form of cult status. A remastered director’s cut was just released last year. But the fact that the film got made at all was the result of an equally improbable set of circumstances. In 1984 The Clash were on the verge […]