In Wonder Woman 1984, Diana Prince appears to be in semi-retirement, working at the Smithsonian Institution as an expert in ancient civilizations while playing mall cop in her spare time. But she is soon faced with a new challenge when an ancient Dreamstone shows up, granting wishes while creating havoc. This is where the real action starts.

Diana and reanimated dead boyfriend Steve Trevor fly to Cairo, chasing after Max Lord, who has fled with the Dreamstone to fulfill his quest for limitless power. The Egypt segment was entirely filmed in Spain, in Almería, on the southern coast, and the Canary Islands.

Lord is shown meeting with the Emir Said Bin Abydos, an Egyptian oil magnate, in his palace overlooking the city. The scene was filmed in the Alcazaba of Almería, an Arab fortress constructed in the 10th century. They stroll through the gardens and stop to talk along the fortress wall.

As the camera orientation changes we see beyond the wall a vast metropolis, and the famous pyramids. This is, of course, not the actual view from the Alcazaba in Almería. In this frame, the filmmakers have digitally superimposed a Cairo cityscape (or something approximating it) over the real one.

A short time later, as Diana and Steve arrive, they are shown looking down on the city as well, but this time we actually see some of the cityscape of Almería (albeit altered and expanded, without the Mediterranean Sea below and with the addition of an enormous wall rising to the right). The Almeriacine blog did a detailed comparison, pointing out specific buildings from Almería that appear here.

Here is what one actually sees looking down from the wall of the Alcazaba.

And here is another image of the city with the Alcazaba on the left. It is a beautiful setting.

In response to the Emir’s wish to have his ancestral lands restored, enormous stone walls rise up out of the ground. Here the wall appears in the middle of a road, taking a car up in the air with it.

There is actually a wall that runs from the Alcazaba down and up the adjacent hillside, which is where this scene was filmed. Though the wall that appears in the film is rather drab compared with the real thing. 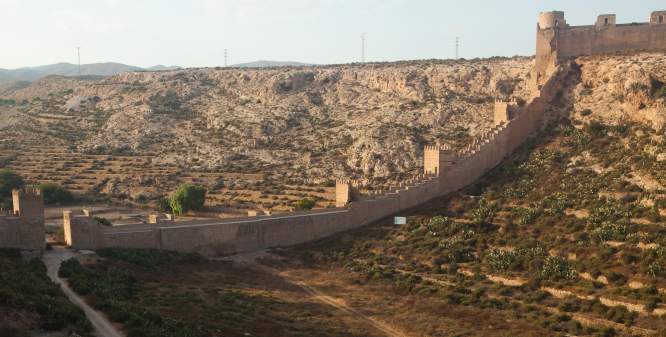 A short time later, Diana has found a payphone in the street (remember those?) to call back to Kristen Wiig at the Smithsonian. All around is chaos, while police, news crews and curious onlookers rush past to where the new wall has appeared down the street.

This scene was filmed along Calle Cruces Bajas, among the narrow streets below the Alcazaba. Marta Rodriguez from La Voz de Almería reported on the shooting here in September 2018. 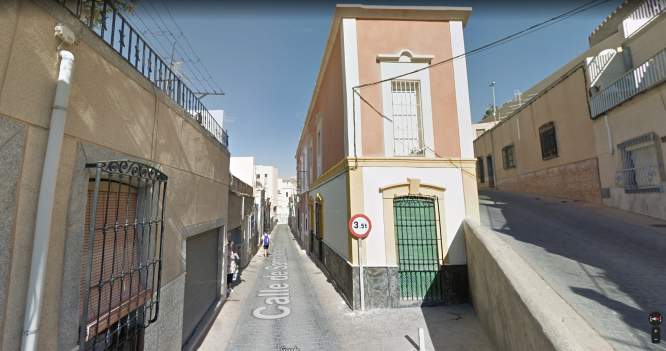 This is all part of the magic of the movies, of course. The fictional depiction of Egypt did draw criticism from commentators, however. Not for its visual illusions, but for the racist stereotypes in its depiction of the Middle East.