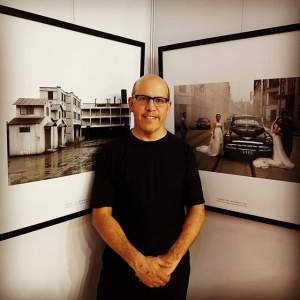 Mark Parascandola is a documentary fine-art photographer based in Washington DC. His work explores how photography, and the movies, shape our perceptions of history and create ambiguity between reality and make-believe. A PhD epidemiologist by training, he draws on methods of historical and public health research in investigating subjects and locations. His work has been exhibited widely in the US, Spain and China. Mark was awarded Individual Artist Fellowships from the DC Commission on the Arts and Humanities 2014 and 2018 and was a Finalist for the Sondheim Prize 2011 and for Critical Mass 2012, 2016, and 2019. His photobook Once Upon a Time in Almería: The Legacy of Hollywood in Spain was published by Daylight Books in 2017. The work from that project was the subject of a solo exhibition at the Embassy of Spain in Washington DC and has since traveled to numerous locations. His latest photobook Once Upon a Time in Shanghai (Daylight, November 2019) documents the rapidly-expanding movie industry in China. The book was awarded First Place in the Documentary Book Project category in the 2019 International Photography Awards and related work was selected for the “Best of Show” exhibition at the Lucie Awards in New York City October 2019.

I am a documentary fine-art photographer based in Washington DC and Almeria, Spain. My work is informed by my training and background in history and public health research. I focus on creating series of images around a location or group of locations that tell a story. I am especially interested in how photographs and movies can shape our perceptions of history and truth or create ambiguity between reality and make-believe. The final product is in the form of a series of large scale prints for exhibition or a photobook monograph with text.

As a historian and public health researcher, I pursue my photographic projects with an obsession for detail and thorough exploration of the theme. Even before visiting a location to take photographs, I conduct extensive research to understand the history of a place and how it has been represented in popular media, talking with experts or locals and seeking out books or documents about the locations and their history. I was trained in both history and epidemiology—the science of understanding causes of disease at the population level. Thus, rather than pursuing the stories of individuals, my photographic projects focus on expansive narratives about a community or an industry—the 80-year history of a notorious prison for political prisoners, the legacy in the landscape from two decades of Hollywood filmmaking in the south of Spain, and the super-sized movie industry in China.

As a photographer, I am intrigued by how photographs and films can be used both as documentary evidence and to create imaginary worlds. There is often a tension between truth and fiction in film and photography. Photographic images can give us a vivid sense of reality yet may reveal only part of a story, remaining ambiguous or even misrepresenting reality. My recent work has focused on the architecture and landscapes of the movies. As a photographer, I appreciate how filmmakers and cinematographers create realities out of a mix of real and constructed elements. Moreover, movies can shape our ideas about historical truth. For example, as Italian films made in Spain shaped Americans’ perceptions of the American West. The Western film sets left behind 50 years ago in the desert of southern Spain, and still there today, suggest a ghost town in the southwest of the United States. Yet they are fake, constructed solely for a fictional story, imposters for real history.

I have been inspired by the photographic work of filmmakers who have worked in some of the same locations, seeking wide-open spaces, exotic landscapes, and dramatic lighting. I strive for vivid colors and rich textures in my work. Although the images document specific places, my aim is more to reference them as viewers may have seen them on the movie screen rather than to represent them in an objective or journalistic way. The images are often set in a desolate landscape among empty buildings, invoking a sense of emptiness and nostalgia for something lost.

I am influenced by other artists who have a fascination with, as well as an ambivalence towards, human impact on the landscape. Film directors like Sergio Leone, who worked in the south of Spain, created dramatic compositions focused on one or two gunmen in front of a vast desert landscape. Photographer Richard Misrach reveals the damage done to natural spaces from atomic weapons tests or industrial pollution, using powerful yet beautiful images accompanied with well-researched text. I have also been influenced by painters like Giorgio De Chirico and Edward Hopper who create landscapes and places that contain familiar elements but appear distant and foreign.

My work involves long term projects, pursued over years with multiple visits to key locations under different lighting and weather conditions, or times when few people are around. I shoot in digital format as it gives me control over the entire process from capturing the photo to the final print. My primary camera is a Canon 5D Mark III camera, along with two or three key lenses, including a tilt-shift lens for architecture. Editing the resulting images and creating prints is also an important and consuming part of the process. While I do not substantially alter the elements in the image, the colors and lighting are chosen and adjusted to give a particular mood or atmosphere. The final product is the printed work, and I do my own printing using a Canon printer with archival inks and Hahnemuhle photo rag paper. Holding the physical print in my hands and being able to examine it is a key aspect of appreciating the work. The viewer can see and feel the texture and detail on the paper and the rich colors that cannot be reproduced on a computer screen. For exhibition, I create large scale prints, from 3 to 6 feet wide, sometimes using a panoramic format to invoke the aspect ratio of the movie screen.

Photography provides a window onto the world. Rather than simply serving as record of what can be seen, it often requires us to piece together a larger story from incomplete information. Photography is forced to rely on what is visible, but can serve as a tool to explore that which is hidden. In this sense, it shares much in common with science or history. My work has often focused on visual elements that are partial evidence of a larger story, such as film sets or architectural remains. Thus, I continue to be inspired by photography as a tool for communicating and for understanding our world.