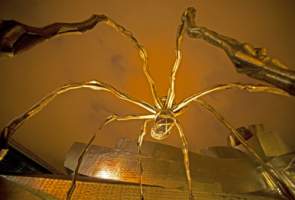 Strangers in a Strange Land

In my space at Artomatic I decided to show a series of images from two very different subjects, the monumental titanium constructions of Frank Gehry and abandoned houses along the coast in Almeria, in southern Spain. In a recent trip to Spain I stopped in Bilbao to photograph the Guggenheim museum before heading south to Almeria. I found both settings to be fascinating but also austere. Gehry’s organic forms take on a more sinister air at night, as the artificial lights impose gold and brown hues on the metal plates and Louise Bourgeois’ spider sculpture appears less playful. The abandoned […]

The Walt Disney Concert Hall in downtown LA is one of my all time favorite buildings. I’ve been there a few times before, but it’s always fascinating to wander around the outside of the building, especially just before sunset as the metal reflect the changing light and color in the sky.