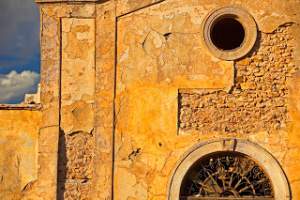 Federico Garcia Lorca’s Blood Wedding was inspired by a true story that appeared in a Spanish newspaper in 1928. A bride-to-be ran off with another man (her cousin) the night before the wedding, but the groom’s brother discovered the couple and shot and killed the lover. The bride-to-be lived on a farm called El Fraile. Over 75 years later, the ruins of the farm remain in the remote countryside of Nijar in Almeria, accessible only by a poorly marked, unpaved road. These images show part of the chapel building on the property.